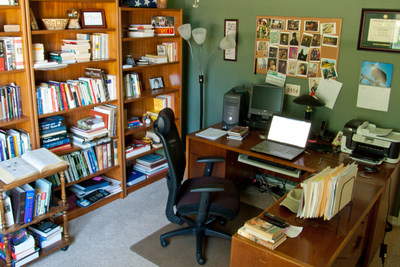 I can’t quite recall how this gentleman from Boise came to my attention over the world wide web, but I am glad he did. Ken Rodgers is one of those writers who lives a fascinating life and then tells us about it in poems, stories, and film. He also tells the stories of others–one of his most recent projects is a documentary film about the Bravo Company of US Marines during the Vietnam war (co-produced with his wife Betty.) Rodgers has “…chased sheep across the desert, chased the enemy through the jungles of southeast Asia, run the head gate to capture cattle, pounded the keys of a calculator, pounded the keys of a typewriter, peddled mountain real estate, and tailed off recycled redwood at a finishing mill,” we learn from his website. How can you not be intrigued? And he is deeply committed to writers and celebrating words, working in various capacities as a teacher and artist. Lucky for me–and for you, too–Ken Rodgers is willing to open up his writing space to us with his View From the Keyboard.

I am particularly fond of a postcard copy of a Diego Velasquez titled “Democritus.” Democritus was an ancient Greek philosopher interested in answers that rely on material data in response to philosophical questions regarding existence. Not much of the spiritual, just atoms and material things.

Although philosophy is one of my interests, it’s Democritus’ face that captures me. The same face a longtime friend owned, and I wonder if Velasquez’ model isn’t my friend’s ancestor. The Democritus in the painting wears a quixotic grin that when rendered by my friend, meant mischief was afoot. Life was like a bronco that needed to be broken. Rollicking, hoof stomping. We drank whiskey and fought. We got drunk and he fought cops. He pulled guns on cops, and mostly got away with it. I watched. Busted Metaxa bottles on the backs of bars.  Gambel’s quail gunned down out of season. The one-night flings with rough-cut women.

Democritus would have recognized our shenanigans as evidence of the material. Not much of the spiritual in our behavior.

My friend has been dead many years but I still write poems, stories and lyric essays based on our common monkeyshines. Often prodded by Velasquez’ grinning—or is it sneering—“Democritus.”

Stalled on the Runway in a Boeing 707, waiting for the B-52s to take off

William Butler Yeats, from “Leda and the Swan”

We wait for them

to leave    on their missions

Await our turn to leave the wounds of war

On the Kadena tarmac

Lined up  they wait

to carpet bomb the ridges

the creeks that meander to the South China Sea

to loose their bombs

with red frown faces painted on

their too-long wings bobbing up and down

as they rumble and creep

forward for their time

We wait for them

Await our turn to leave the wounds of war