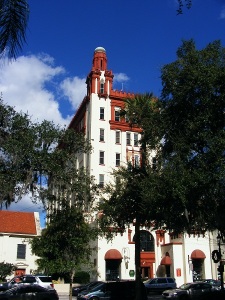 Patty is taking a well earned rest after a hard semester at Columbia College, where she is currently the acting chair of the renowned Fiction Writing department. Her academic duties have also coincided with the launch of her short story collection, “The Temple of Air”. Which is why you’re reading this blog in the first place, isn’t it?

Actually, if you know Patty personally, it will not surprise you to know that she is taking a well-earned nap at the moment. Which is why I am standing in for her and writing this blog post from Florida, where we are spending the New Year holiday in an effort to recharge the batteries before 2012.

So it is New Year’s Eve, and today in St. Augustine, Florida, it was in the mid-seventies Fahrenheit. The photo above is of one of the grand old buildings framed against a glorious blue sky. If you’re reading this in the frozen north somewhere, and you’re feeling a little bit envious, and perhaps wishing all kinds of bad things on me, then I have succeeded in my intention. My work is done here.

What do I really want to say, before Patty wakes up, reads what I’ve written, and starts deleting everything? I want to say that as the husband of the author, it is difficult to have an objective opinion about my wife’s writing, or at least to persuade people that I could have an objective opinion. But I hope you’ll believe me when I say that even if I were not married to Patty, and if I had happened upon “The Temple of Air” as an anonymous reader, I would have been bowled over by the strength of the writing, the dark nature of the material, the toughness of the characters’ emotional struggles. I love the way in which we seem to traverse dark landscapes with Nova, Sky, Michael, and the others, and that there are no easy answers to their conflicts. I love the sense that the only saving grace comes from us, the readers, as the silent witnesses to their pain.

2011 saw the publication of these stories. It brought a memorable book launch at Women and Children First, in Chicago. An interview on the local NPR station with the inestimable Alison Cuddy. A book reading in Hampstead, north London, which is still the literary heart of the publishing world in England. Appearances at book clubs in the midwest. Conversations with old friends and new friends on Facebook, Twitter, and this blog. Have I missed out anything? Patty is strangely reluctant to toot her own horn, so I feel I should list everything I can. Suffice to say that it’s been a breakthrough year (and I think 2012 is going to be even better).

I know that Patty will thank you in person at some point, but in the meanwhile, as I sit here with a laptop on my, er, lap, sipping a glass of wine and looking out of the window on palm trees swaying gently against the greening sunset Florida sky (are you jealous yet? you fucking should be) — let me raise my glass to you, o supporter of “The Temple of Air”, and to the author herself. Here’s wishing you and her all the success that you are capable of and that you deserve in the coming year.