“To take my work seriously would be the height of folly,” Edward Gorey once said. And yet, we do take it seriously. Gorey’s drawings and writing—sometimes creepy, sometimes silly, sometimes moving, and always skillful and clever—have inspired and delighted readers, writers, and artists for generations.

Among these Gorey aficionados are Chicago writer Todd Summar and Chicago artist and storyteller Kenneth Gerleve. In honor and celebration of the work of Edward Gorey, this talented duo have launched the journal Goreyesque, and are mounting a related exhibition this month at LUMA, Loyola University Museum of Art. Recently, I had the opportunity to speak with Todd and Kenneth about both of these endeavors. 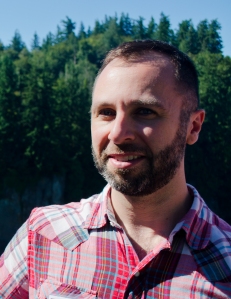 PMc: Todd, tell us about the project:

Todd: Goreyesque is an online literary journal featuring work inspired by the spirit and aesthetic of Edward Gorey. It was originally created to provide a forum for work that celebrates Gorey’s influence across all genres, featuring up-and-coming artists and writers alongside seasoned professionals. The spark of the idea was triggered by the Chicago debut of Gorey’s work at the Loyola University Museum of Art (LUMA). Elegant Enigmas: The Art of Edward Gorey and G is for Gorey C is for Chicago (a companion exhibition from the Thomas Michalak Collection) are on display until June 15, 2014. My partner Kenneth Gerleve is a visual artist and storyteller, and was asked by LUMA to design an installation that would appear in conjunction with the Gorey exhibition. Ken’s “Summerland: A Ghost Story“ is a sixteen panel narrative installation that combines image and story in a fashion similar to Gorey’s famous picture books.

That project led to the conception of an anthology of work that would combine fiction with illustration and other forms of art in an ongoing literary journal style format. Sam Weller (co-editor of Shadow Show: All New Stories in Celebration of Ray Bradbury) was an early supporter, and helped us establish a partnership between the Department of Creative Writing at Columbia College Chicago and LUMA. I joined forces with editors Howard Simmons, Corey Klinzing, and Jess Millman, and soon after, Goreyesque released its first issue in February, its second in March, and will release issue three on April 25, 2014 in advance of our public reading event to be held at LUMA on April 29. Established authors such as Joe Meno, Weller, and Adam McOmber will read their Goreyesque work, alongside writers specially selected by judges Weller and Mort Castle. After April, we will release issues on a quarterly basis. We have featured work from writers and artists from around the world, and continue to accept

submissions on an ongoing basis.

PMc: Why did you choose Edward Gorey?

Todd: Edward Gorey’s dry wit and darkly humorous style has inspired authors, filmmakers, and artists, such as Neil Gaiman, Tim Burton, and Lemony Snicket, for decades. His appeal spans genres and disciplines and is the perfect avenue for artists of all varieties to converge. Beyond that, Gorey’s sensibility lives on, and still feels fresh, after nearly 60 years of existing in the public consciousness. Work as recent as Wes Anderson’s latest film The Grand Budapest Hotel draws heavily upon the tone and style for which Gorey is known. When Ken began his work for LUMA, and I spoke to various people about the project, their reactions were overwhelmingly enthusiastic. It was clear that Gorey’s work captivates people’s imaginations, eliciting fond memories of their first exposure to his books, or reminiscence of the opening animated sequence he designed for the PBS Mystery! television show. On the other hand, people who may not have immediately recognized Gorey’s name were familiar with The Gashlycrumb Tinies, Cautionary Tales for Children, or other signature Gorey works. Before entering the Creative Writing-Fiction MFA program at Columbia, I was a big fan of the tribute Weller and Castle paid to Ray Bradbury with Shadow Show, and I wanted launch a similar project that would showcase work inspired by Gorey. The support the project has gained has been exciting and overwhelming.

PMc: You are a writer of many things yourself, Todd, including fiction of a haunting nature. Does this particular literary interest come in part from your exposure to the work of Edward Gorey? Tell us about your “first time” with Gorey. And Ken, do you have a “first time” story? Was Gorey an influence on your art before this project?

Todd: In my early youth, and in the years that I’ve grown as a writer, I was more influenced by authors and artists whose work actually veered into far darker territory than Gorey’s. But one of the key lessons I learned as I began to appreciate his work more and more, is that in even the most haunting of stories, a humorous or quirky element actually helps to enrich and deepen the material. Gorey’s wit, even when it’s as dark and dry as a bone, allows us to laugh in the face of death, to celebrate the mundane, and to considerate life with a deceptively insightful simplicity. When I find myself getting too morose or too monotone in my fiction, I try to step back and remember the skillful way Gorey managed to balance these light and dark elements in relatively few words and images. I think this is why his influence has endured.

My first memory of his work, like many people, would have to be The Gashlycrumb Tinies. I discovered the alphabetical picture book chronicling children’s deaths when I was grade school age, in the 1980s, right before everything meant for children was sanitized and scrubbed for safety. Back when kids could stumble upon books like Scary Stories to Tell in the Dark by Alvin Schwartz, and its frightening illustrations, and stay up all night, disturbed by their own imaginations. I was captivated by Gorey’s frank, but humorous, depictions of the gruesome deaths of 26 children, describing but never quite showing the final moments. This fascination with the dark side of humanity always existed inside of me, but Gorey’s work helped draw it out.

Ken: When I was nine years old, my family took a vacation to Door County, Wisconsin. We stayed in a cabin on a lake with no television and little else to do. My parents’ concession was a trip to a local bookstore, where I found a copy of a young adult Gothic mystery novel called The Curse of the Blue Figurine by John Bellairs and illustrated by Edward Gorey. Needless to say, I became hooked. For years afterwards, I sought out and devoured copies of Bellairs’ books which were nearly always illustrated by Gorey. I also started to collect the reissued versions of Gorey’s Amphigorey anthologies and his individual books. I was devastated when both men died. When I started writing and illustrating my own stories in high school and college, I was essentially creating

PMc: In doing this work for Goreyesque, have you discovered anything new about the writer/artist that you didn’t know before?

Todd: I wasn’t always aware of the level of camp that Edward Gorey reveled in. In fact, he famously detested his work being called “macabre,” and instead preferred “titillating.” He enjoyed everything from going to the opera to watching The Golden Girls. There are many videos on YouTube in which he flamboyantly discusses everything from his own career to the prurient details of his favorite soap operas. Fans of his work may not automatically associate him with such wild contradictions, but upon closer examination, this playfulness exists throughout his stories. Besides, someone whose signature outfit once consisted of a floor-length fur coat with sneakers and shorts had to have had a fiendish sense of humor!

PMc: What do you hope his legacy will be, and how do you intend this project to be part of that?

Todd: Gorey’s obituary in the Guardian quoted him as saying: “I see no disparity between my books and everyday life … I write about everyday life.” One could argue that he presented everyday life through a somewhat bizarre and often whimsical lens. For those unfamiliar with Gorey’s work, or only familiar with limited aspects of it, I hope that a project like Goreyesque, and the works on display in the exhibition, will expose them to the vast range and multiple angles of life that Gorey explored throughout his career. He wasn’t just a children’s author, an illustrator of dark subject matter, or a godfather of modern Goth culture. I also hope that Goreyesque provides writers and artists with an enjoyable challenge – a writing or visual prompt, perhaps – that encourages them to approach their work in a new and exciting way and allows them to participate in this celebration of Gorey and to be part of this community of creative thinkers who have benefitted from his legacy for decades. We have already received so many interesting pieces from an amazing pool assortment of talent. I can’t wait to see what else comes our way.

PMc: Anything else you want us to know?

Todd: Though the LUMA show ends in June, Goreyesque will continue indefinitely, becoming a quarterly publication this summer. Our Chicago reading event at LUMA is April 29, 2014 but we are still accepting submissions for future issues. Chicago is certainly our home base, but we accept and encourage work from writers and artists around the world. We are hoping to eventually raise the funds to produce a printed anthology of the best selected works from Goreyesque, but that is a long-term goal and we will keep readers updated on its progress as we move forward.

Elegant Enigmas: The Art of Edward Gorey and G is for Gorey C is for Chicago and Kenneth Gerleve’s “Summerland: A Ghost Story” will be on display at LUMA, 820 N. Michigan Avenue, Chicago, IL until June 15, 2014.

A special Goreyesque reading will be held at LUMA on Tuesday, April 29, 2014.

For further information, please go to these websites:

→Thanks, Todd and Ken, for filling us in. And as always, thanks everyone for reading. -PMc←