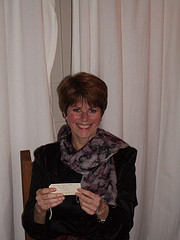 The votes are still being tallied for Favorite Short Story, and this being Chicago, many of the voters are following our city motto: “Vote Early and Often.”

So far, though, more than 60 separate short story titles have been named favorites by more than 50 readers. And this is just a small sampling of the reading public – my friends and Facebook followers. Take that, book publishers. Not only are short stories being read, they are being adored, re-read, recommended, and shared. If you print it, we will read.

Many people have taken the time to comment on their choices, and I offer a small sampling of these responses to you now:

‘I have a three-way tie for my favorite short story so in no particular order, “Sonny’s Blues” by James Baldwin, “The Ledge” by Lawrence Sargent Hall, and “Hills Like White Elephants” by Ernest Hemingway. Each time I read Baldwin’s I discover something new on the page, something compelling. Hall’s piece is just so menacing that I still feel a chill just thinking about it. And Hemingway’s subtle ending and vague conversation has me changing my mind about the third to last paragraph again and again.’  – Patrick J Salem, editor of Chicago Pulp Stories

‘My favorite short story, without a close rival for me, is, “The Portrait of Mr. W.H.”, by Oscar Wilde. A theory described by his character, Erskine, of the mystery of Shakespeare’s dedication of his book of sonnets in 1609, to a, Mr. W.H.
The story is part fable, part criticism, part legacy and treatise, and the chararcters are warmly absorbing. Plus Wilde’s theory is in part; conceptually conceivable. Written with eloquence as I find all of Wilde’s stories; this ends in a subtle, somber fashion, unlike many of his other short stories which present, in physical form; flowers, gems, money, and gold and various magical manifestions, despite the sorrow, death and suicide often at the center of the story. Truly a good read, and I would suggest this for a cozy, quiet afternoon.’ – Dale Stroker, Florida

‘Shirley Jackson. “The Lottery.” Scared the crap out of me when I was 13. Still does.’ – Jo Cates, Dean of the Library, Columbia College Chicago

‘Too many to name! I agree about “What We Talk About When We Talk About Love” and would add the obscure John Steinbeck story, “Johnny Bear.” Aimee Bender’s “Quiet Please” for a more recent work.’ – Carrie Etter, poet, UK

And the following was pulled from a much longer comment posted by Philip Hartigan to Gina Frangello’s answer to “Why the Short Story?” You can read the rest of this on the comments section of that page.

‘Tolstoy’s ‘The Kreutzer Sonata’ (which may be considered a novella, but never mind). Why? Because it’s like a miniature version of ‘Anna Karenina’, showing how love can be so dangerous that it can lead to the utmost extreme of human experience (suicide for Anna, wife-icide in ‘The Kreutzer Sonata’).

John McNally’s ‘The Vomitorium’. There’s something about certain writers who are in complete command of their art: when you start reading them, it’s like the difference between turning the ignition in a mini, and starting the engine in a Rolls-Royce (I’ve done both, by the way). John McNally’s prose purrs like an RR engine. And it’s so moving, too — the final gesture of this story is funny, kind of silly, and yet extremely moving.

And most recently, I read ‘Rape’, by Gerard Woodward, from his collection ‘Caravan Thieves’. Patty put me onto his work, as he was her colleague when she spent a semester at Bath Spa University. The eponymous word refers to a field rather than an act — though the act that occurs in the story is strange, surreal, and surprising.

In case this sounds like a series of short reviews, let me say that I picked these stories after asking myself: which short stories come to mind right now? That these three came to the fore is not just a testament to the emotional depth and artistry of the authors, but the unique ability of the short story form to present condensed (yet in the case of Tolstoy, not exactly short) meditations on the world.’

I’ll be closing the polls this weekend and updating you with the final results and more comments passed along by readers, writers, and friends.

In the meantime, long live the short story!