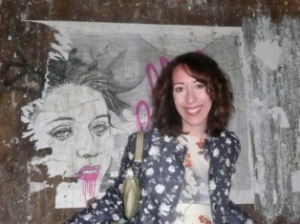 Gina Frangello takes time away from her many deadlines (including finishing edits on her new novel) to answer Gerard Woodward’s questions about endings–best ones, preferred ones, how to find one, etc. As a companion to her answers here, why not look at her novel My Sister’s Continent, or her short story collection Slut Lullabies?

Gina: When I was editing Other Voices magazine, it may be fair to say that the most frequent kiss of death in an otherwise well-written, engaging story was the “punch line ending.”

You know: that story with a resolution that—once you know “what happened,” all is so resolved that you never really need to read the story again. The story wherein every single line and nuance pointed to an Exit sign, and once the Exit has been revealed, those nuances are no longer satisfying because now we know.

These types of stories (and novels) can be awfully exciting to read on the first sitting. There’s a good reason the thriller and mystery markets are so popular. But, with notable exceptions, they rarely hold up to or invite re-readings. They exist on a tightly wound string that tugs the reader along . . . and once we reach the finish line, the string goes once again slack, never to regain its tautness. Those signifiers don’t point to anything anymore, because the question (the only question) has already been answered. Case closed.

I don’t, if it isn’t already apparent, much care for stories like that.

Like all writers and avid readers, my favorite works of fiction are ones I’ve read over and over again. They are stories that yield a different result depending not only on who’s doing the reading, but at what moment of his or her life. They can be counted upon to yield new surprises each time—not in terms of finding out “who dunnit,” but in terms of a new resonance in the way a detail may serve as a dark echo of an earlier detail; in the way a character’s psyche opens itself up in vulnerable ways that may have seemed flinty and cool on the first read. The way that, say, upon first reading Doctorow’s Book of Daniel, the narrator, Daniel’s, Theory of the Other Couple may have seemed either a startling epiphany or a pitiful grasping at straws, and then, rereading the same novel ten years later in a different political climate and at a different stage of life, may seem precisely the inverse, so that both things become simultaneously True.

In my debut novel, My Sister’s Continent, twentysomething Kirby narrates both her own story and that of her identical twin, Kendra, who disappeared some unspecified number of years prior, leaving behind only some journals written during a period of intense instability. If arguably Kendra is an unreliable narrator of her own life, then clearly Kirby’s second-hand narration is more unreliable still. In the end, the stories Kirby chooses to tell about her sister may reveal more about her own desires or demons than they do about Kendra’s—or at least as much. The novel is not without plot twists or surprises, but even in some of those cases, it’s never entirely clear whether a new development is an Absolute Truth, or simply what one of the twins believes happened. While the sisters’ story contains certain immutable facts, much else falls into a gray terrain of “perhaps,” and as such can be interpreted in different ways by different readers.

The way we interpret may, of course, reveal as much about our own desires and demons as they do about the characters’, or even the author’s.

Not all literary fiction must be completely open-ended, clearly. Narratives like Toni Morrison’s Song of Solomon, where we end literally with Milkman mid-jump towards what may be his own murder—or Joyce Carol Oates’ “Where Are We Going, Where Have We Been?” where Connie may be heading out her screen door to be raped, or may be heading out to be murdered as well, or may somehow be unexpectedly saved before meeting her doom—do tend to be more the exception than the rule in literature. Most stories/novels contain some measure of resolution, and that’s fine with me. Unrelenting open-endedness could quickly become almost as formulaic as the “punch line ending” if done to the point of . . . well, formula. The issue is more one of how many ways there are to read a story, and whether the reading is identical to every reader. Does the story offer Truth or truths?

I prefer the latter.

On a closing note: one thing I always remind my students is that every person has his or her own narrative, in which s/he is the star and the one whose actions are “right.” Whether aiming for the perfect ending for a story or whether simply trying to develop characters, a writer can scarcely hold in mind anything more important than the way the story might shift if looked at from another character’s angle. Writing fiction is much more like, say, parenting, than it is like riding a bike or sticking a plug in an outlet or piecing together a puzzle. There is no one right way to do it, but rather a myriad of successful and unsuccessful techniques and approaches that often overlap and intersect, so that a “great” story is not always the same as a “perfect” story just like a great dad may not be a perfect dad. If we struggle towards anything as writers, it is understanding. Sometimes, when I’ve written an open-ended conclusion to a published work, readers ask me what “really happened,” and although I have my own picture in my head, I maintain that my vision—once the story is on the page—is no more or less real or definite than anyone else’s. We are all in this messy, ambiguous and resonant business of fiction, like life, together.

P.S. It’s been such a pleasure to engage in this dialogue with Patty, Vanessa, Gerald and Dennis, and it’s so fitting to end on the note of endings. Thank you, Patty, for including us all in the discussion, and thanks to all my fellow writers for this vibrant exchange.

→Gina, thank you for taking part in this conversation. We’ll keep up with your work and ideas about writing on The Nervous Breakdown. And readers, keep checking back for more on the art of endings from Vanessa Gebbie, Gerard Woodward, and me. -PMc←