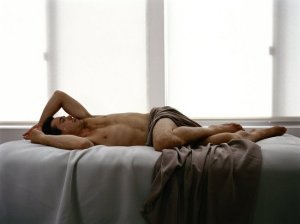 It sounded like crying. Not like a child, but still tears and he was talking to himself in muffled whispers and all his choked words losing their shape so that it was closer to moaning. I heard a whipped dog once, and it was a sound that was the same, all the world breaking and that dog shrinking into its own shadow like it could climb into the dark of itself and disappear.

He turned from me in the bed.

And it wasn’t his fault. It wasn’t anyone’s fault. Some things aren’t. Some things just are what they are, with no one to blame. Like rock is, or water, or cold.

It hurt me to see him like this. It was unexpected. The tears and the shifting out of reach. A part of me thought this was for the best. It would make it easier to leave in the morning. But at the same time I felt for his pain.

‘Some things just run their course and it’s over,’ I said.

Robbie, a lad about town till he met me. His friends had said I was not good for him, that I took him away from them, that I had a hold over him that made him more mine than theirs and they had history and I didn’t.

‘You’re different,’ they’d said, and they did not mean in a good way.

And now my name would be shit or worse in their mouths and they’d get drunk together, Robbie and his friends, and they’d leer at girls in the street and maybe they’d get lucky, and Robbie would say ‘fuck’ and ‘yeh’ and maybe that would be it and everything back the way it was before. Before Robbie met me and I met Robbie.

Only here he was crying in his bed, sounding like crying, like a cowering dog whose world has been stripped of all meaning, and I hadn’t expected this.

→This brief piece was submitted by Callie to the comments section in response to Daily Journal Prompt 156. Thanks, Callie, for a fine bit of writing. -PMc←