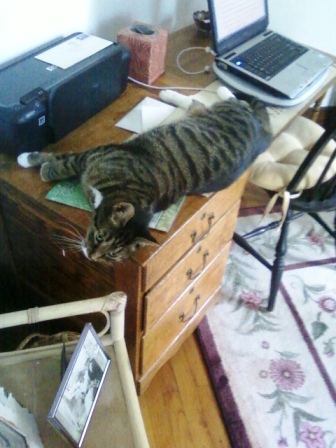 Perhaps you have read Philip’s fine blog post today about his (almost) studio in Mount Carroll, IL, where we have a nice old house. If you have, you know that he has hit some snags along the way, and has not been able to complete his dream studio as originally planned. 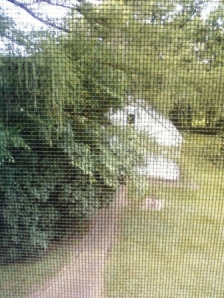 As I read that piece, I was reminded how lucky writers are in that they can create just about anywhere. On a train, in a coffee shop (where I am now,) and in our very own writing rooms. I am one of those folks who really likes to have things set up the way I want them, and my writing space in Mount Carroll is a good example of that.

The necessary things are there: computer, journal, coffee, comfortable chair, cats, a view that I need to turn in my chair to see (like I talked about in an earlier post, and in this case, Philip’s (almost) studio building through the screen over my window.) My desk is a small old piece that I believe one of my great-great aunts used as her art table.

The not so necessary things–the ones that give me delight: an old portable (!!!! it weighs about twice as much as my laptop and the carrying case is even heavier) typewriter that Philip bought me for my birthday; pictures of my mother and of Hemingway in Cuba with a six-toed cat in his arms; a wedding day photo of me, mom and mother-in-law Maggie; a plate with the muses dancing around its edges; a collection of bells, some that were my mom’s, another I bought in a delightful antique store in Empire, Michigan; a tiny sock monkey (I LOVE sock monkeys); a miniature typewriter that is really a pencil sharpener; a small letterpress stamp of a secretary at the keyboard; a bunch of paperclips in a bowl that my mother brought back from some exotic place; a bobble-head turtle; mug from Maine that the delightful Anne-Marie Oomen gave me once when we were teaching together at Stonecoast Writers’ Conference.

I like my stuff. I am a stuff girl.

And here, then is a bit of the novel-in-progress I’m working on.  Today, I think it might be called Climbing the House of God Hill. Allison, one of the pivotal characters, is playing her first game of Truth or Dare with a bunch of kids at a 4th of July party. Perhaps you don’t need me to tell you that, though.

And even though the kissing was nice now, now that Trevor stopped all that crazy moving around (and good practice, she figured, why not) she was done with all of this already; it wasn’t what she expected, wanted, desired.  It seemed silly now, this Truth or Dare they were playing.  Kids’ stuff.  Baby game.  And why wasn’t it enough for her to be here with them, to be like them, tiptoeing into the next part of their lives?  Why did she want so badly to have more, to do more?  She knew, as she pushed Trevor’s hand harder against her own breast, held it there and moved it slowly instead of that fast rubbing in circles thing he’d been doing, that it was part hormones, probably, sure, the stuff they warned them all about in bible study, and it was partly the books she’d been reading, her mother’s books.  But it was partly those other books, too, the ones her father actually allowed her to read, the ones that talked about sin and redemption and always—to Allison at least—made the sinning part sound more exciting, more rewarding (except maybe the burning in hell thing.)  And then there was that other feeling, that awareness that she carried with her always about how she was going to die sometime unexpectedly, who knew when, like her sister, like her mother, like those people on the planes and in New York, and what if she died and she never had the chance to—you know—have sex?  Even when Rebecca talked about sex with her (when Bud was away, obviously, and only when Allison asked) she talked about it being something special, miraculous.  And what if Allison died—she could, you know, maybe fall and break her neck, maybe get terminally ill, maybe a terrorist attack, these things happened—and never got to feel what this is supposed to feel like, this special, miraculous thing?  And she pulled Trevor to her even more closely and she wound her legs around his, impressed her body on him.  She held on.

→Do you have your own View From the Keyboard? Find submission guidelines under “categories” at the right. Enrique (top cat,) Pablo (cat at bottom,) and I thank you for stopping by.  -PMc←