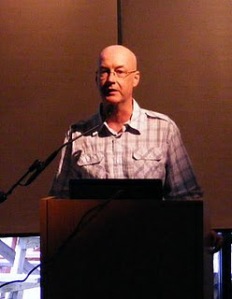 The very fine visual artist and art writer Philip Hartigan (as many of you know) is my husband. He is also the curator and writer of the art blog Praeterita. And he and I teach a course called “Journal and Sketchbook” at various locations and to various populations. (Next up, a semester long course in the Fiction Writing Department at Columbia College Chicago.)

This fine line and connection between the visual and literary arts has always been of interest to Philip. Here then, is a brief excerpt from an interview he did with Gerard Woodward, one of my favorite contemporary writers (check out the conversation he took part in for this site here.) I encourage you to click through to Philip’s website and see the images and video connected to the post as well.

I am extremely pleased that poet and author Gerard Woodward agreed to be interviewed for this series. Gerard and my wife, Patty, were colleagues for a short while at the end of 2008, when Patty taught for one semester at Bath Spa University, where Gerard is a faculty member in the Creative Writing program. Gerard spent the spring semester of 2011 in Chicago on a reciprocal visit. Gerard has published poetry, short-stories, and novels. “Householder”, his 1991 collection of poetry, won the Somerset Maugham Award in the UK, and his novel “I’ll Go to bed at Noon” was shortlisted for the Booker Prize for Fiction. Of his most recent novel, “Nourishment”, The Daily Telegraph reviewer wrote: “It is a novel to be savoured, and Woodward is a novelist to be treasured.” It turns out that in addition to his success as a writer, Gerard started his adult life in art college, and still draws and paints when he can. So here, from a writer’s point of view, is a discussion about how a writer sees, how a writer draws, and what parallels he observes between the sister arts.

PH: Your first stint in higher education was at an art college (and I believe you are married to a visual artist). What do you remember about yourself and your relation to visual art at that time in your life?

GW: I chose to go to art school as a way of escaping the humdrum working life I was living at that time. I left school at 16, convinced there would be a nuclear war by 1985, and didn’t want to waste my life in sixth form. So instead, I wasted it working in a Tescos supermarket (and many other places – I had six jobs in two years). So going to art school was a way of escape – but I didn’t choose it out of any life-long ambition to be an artist. In fact I didn’t want to be an artist at all, and had originally applied to do graphics, with an eye to being something like a designer of some sort eventually. But then, when I got there, I met lots of people who wanted to be artists, and we hung around in little groups sneering at graphics students with their scalpels and their letraset sets. So I switched, during my foundation year, to fine art, in the full knowledge that I’d just signed away any chance I’d had of getting the good job I’d come to art school to get, and would be likely to end up back in the factories I’d tried to escape. (read more…)
→Thanks for reading! – PMc←