On Christmas morning I found this note in the comments section of my blog:

“I have been waiting for you to post the Christmas Eve prompt just so I could do something for you… a Christmas gift of sorts for giving me something to make me write again. Hope your Christmas is filled with joy. And here’s another short tale for you:”

Some of you have read the work of this person before. Lindsay. Quite a number of months ago, Lindsay started posting wonderful short pieces as comments on my blog in response to the Daily Journal Prompts I’ve posted. I don’t think I know Lindsay personally (do I, Lindsay? Have we met? Am I just being dim?) but I feel so incredibly lucky to have come to know her work from the writing she has shared with me (and us.) I have to admit, when I look for images and listen for lines to post as prompts, I sometimes imagine Lindsay coming to my page, writing something, sharing it with us. If you look back over the Daily Journal Prompts for this past year, you will find quite a lot of her words here.

Thank you, Lindsay, so very much for your writing, your willingness to share. And now, thank you especially for this: 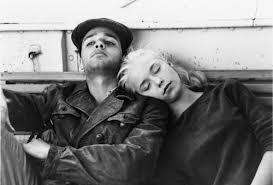 They Were Heading Home ~ A Christmas Gift from Lindsay

They were heading home. Like in the song, ‘Driving Home For Christmas’, only they weren’t so much driving as being driven. Down on their luck this year like last, and going back to where they belonged. Curled into each other in the back of a beat up ’64 Dodge truck, a failing winter sun on their faces and their cheeks nipped by cold. And just maybe they’d get there in time.

Joe promised her it would be alright. Mary wasn’t sure. She said he should have called first. Just in case. Just in case there was not room. After all, they weren’t expected. Joe reassured her that it would be fine and he put her head on his shoulder and he sang Christmas songs to her in a voice that was nearer and nearer to whisper.

Mary slept fitfully and when they stopped for gas Joe got her to stretch her legs and he fetched her a paper cup of ice and that felt better. And the man in the gas station gave him a bag of broken Oreos that wouldn’t sell, and some milk, and a blanket to keep them warm, and he wouldn’t take anything for his kindness.

And stars crept out one by one, and the road was a little rougher than before and their breath hung on the air like smoke. Joe kept looking at his watch and he held Mary closer and felt the kick and kick of the unborn baby pressed between them. And Joe said it would not be long now, really it wouldn’t.

And Joe should have called because the house was full when finally they were there, and a makeshift bed had to do and there was space in the backroom where old chairs needing mended were stored and empty suitcases and bottles of hooch that were labeled by year.

‘Like in the story,’ said Joe’s old man. ‘You know, and there should be shepherds and wise men and gifts.’

And they laughed, though Joe was paler than laughter should be and Mary held her breath and counted the seconds between one stab and the next. And Joe’s mom put water on to boil just in case, and the doctor’s number placed by the phone, and all the lights in the house were on.

The story has an ending, as a story should. And because it is a Christmas story it ends happily as it must and maybe you’d think it was more of a beginning than an ending for, though the birth was not easy or quick it was fine, and the baby arrived before it was Christmas and it was called Jack and his leg a little twisted so that he would one day be called Jitterbug Jack for the way that he walked and he laughed every day of his life, I promise he did, and that would be another story.

→Happy 4th day of Christmas, everyone. And if you don’t celebrate the holiday, I still wish you a happy day. And a joyous new year! As always, thanks for reading. -PMc←

2 Replies to “A Christmas Tale ~ By Lindsay”