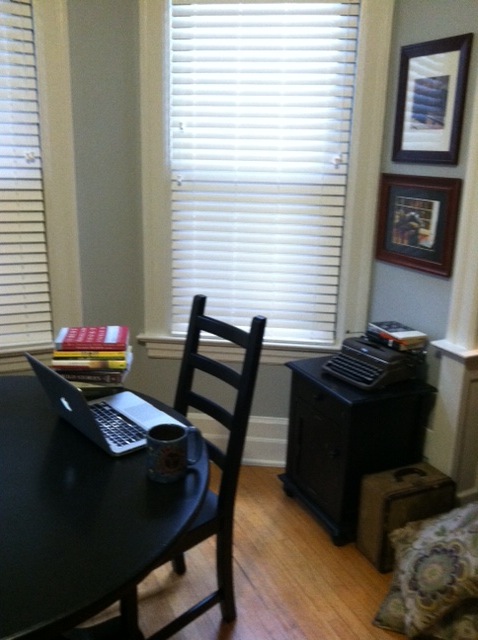 So pleased to have David W. Berner give us a glimpse into his workspace. David is an award-winning journalist, a radio guy, a fiction writer, and a colleague of mine at Columbia College Chicago where he teaches in the Radio Department. Most of all, though, this man is a storyteller. I may be wrong here, but I think story is among those things he values most. In fact, he developed a course at Columbia called “The Radio Narrative – Tell Your Story,” in which he helps students find the best of the stories that have meaning for them and produce them for radio audiences. Story? Yes, please. And pass it on, I say.

The romantic side of me wants a shed, a Dylan Thomas-esque boathouse, some spare spot of fertile ground where wonderful ideas could germinate. But, I don’t have a boathouse, or a boat, or live near water. Truth is, I write in a lot of places: coffee shops, trains, slumped in my living room couch. But one spot is a favorite. It’s a corner of my small dining room near the window where I can hear city noises. I like the soundtrack of traffic, car tires on rain, the bells of the old church across the street, the voices of those walking by. I like being surrounded by books I’m reading and the beloved old ones. Their presence inspires. Coffee is necessary. And behind me are two photographs that have always been special to me. One is of Hemingway’s writing space at his home in Key West and the other is by the famous photographer Zeny Cieslikowski entitled “San Francisco.” It’s an image of the the street outside City Lights Bookstore, one of my favorite literary destinations. Below them is a portable Royal typewriter, circa 1940. I don’t always write in this space, but when I do it may be the best place in the world.

Excerpt from “Over the Edge and Into the Wind”

(First published in Epiphany and then part of After Opium.)

The next day, Michael and Tony traveled 500 miles to San Francisco, drove across the Golden Gate, walked through the Haight, downed late night beers in North Beach, then found a room at the Crystal Hotel – what some called a flophouse on Eddy Street – to sleep away the long ride from Arizona, each taking turns on the floor and the bed. And in the morning, Michael found on the wooden table near the door, a napkin slid under a hard plastic bathroom cup, a crushed cigarette butt still smoking from its bottom. On the napkin was a handwritten note.

I hope you find what you want, and always write what you love.

That fall, Michael found himself back in Las Cruces. He had taken a full time job teaching English at the high school, and each early morning he had made it his routine to steep a pot of tea, sit at his small kitchen table and look out the window toward the Organ Mountain range, and write verse that mattered to him. And sometimes on the weekends, Michael would roll out his sleeping bag on the stony desert ground to sleep under the Southwestern stars and dream of flying.

→After Opium is available for purchase through Amazon and at www.davidwberner.com–as are others of David’s books. And to hear this gent read live, why not check out 2nd Story’s “Tough Guys Talk Tough: Stories of Image and Action”, March 10 & 11, 2013 (two shows) at Webster’s Wine Bar in Chicago. Thanks, David, for letting us into your space. And as always, thanks to all for reading! -PMc←