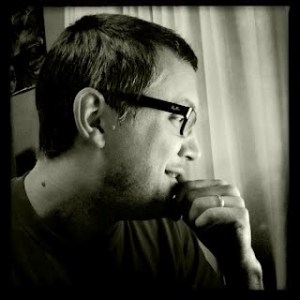 Mondays + Writers = finally something to look forward to.

Week six of The Writer’s Handful welcomes Rob Roensch, a writer who comes to us from Baltimore, and whose new story collection The Wildflowers of Baltimore is an impressive award-winner. Before you skip on down to Rob’s answers to my handful of questions, check out this wonderful book trailer by Nick Gardner. You know you want to read this book!

Yes, a little. I’m in between stacks of composition essays at the moment so this morning I had the time and brain to sketch out the first scene of a new Baltimore story–a homeowner looks out of his second floor window to see a handful of tweens goofing around on his garage roof. What happens next I’m not sure.

The first piece of writing I felt possessive of was a long piece of Star Trek: The Next Generation fan-fiction I wrote in maybe the fifth grade. It was about a mysterious planet and the transporters malfunctioning. It was not the last piece of Star Trek fan fiction I ever wrote.

At the moment I’m just starting The Death of a Beekeeper by Lars Gustafsson and Invisible Man by Ralph Ellison. They sort of go together.

The best advice about writing I ever heard was an overheard comment from one of my teachers in Graduate School, the great Dan McCall. The advice was simple: Be Better. It’s maybe not really advice, but it is a statement that challenges while also giving hope, because telling someone else, or yourself, to be better implies that, yes, it is possible to be better.

If your writing were an animal, what animal would it be?

Probably a big weird blue bird that does not know how to fly but really wants to.

Rob Roensch has an MFA from Cornell University. Currently, he is a Lecturer in the English Department at Towson University. He lives in Baltimore with his wife and two daughters.

He won The International Scott Prize for Short Stories in 2012 from Salt Publishing for his collection titled The Wildflowers of Baltimore. He is working on a novel.

For more about Rob and his work, check out his website: robroensch. And don’t forget to watch this book trailer! book trailer | robroensch

→Thanks so much, Rob, for joining in the Monday conversation. And thanks to all of you for reading! -PMc←

3 Replies to “The Writer’s Handful with Rob Roensch”